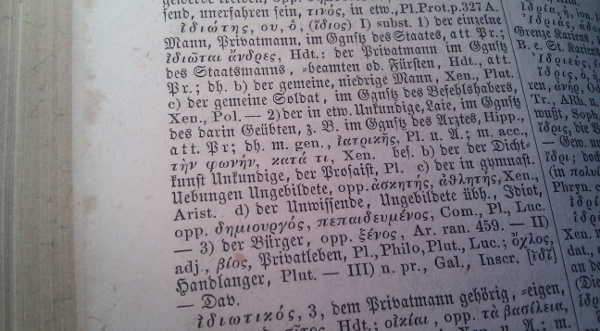 Totski muttered to himself: “He may be an idiot, but he knows that flattery is the best road to success here.”
Dostoevsky, The Idiot

The status for the following app has changed to Removed From Sale.
App Name: WikiLeaks App
Techcrunch, 21.12.2010

The iPad as a particular device is not necessarily the future of computing. But as an ideology, I think it just might be.
Steven Frank, http://stevenf.com

The idiōtēs in the Greek Polis was a man, who did not separate the public from the private – in most cases out of economic necessity, like a merchant, or because of social restraint, because he or she would be denied political action, as was the case for slaves or women.

Plato in his Republic describes what he finds pathetic about this: An Idiotes only cares about his own Oikos – his own fire in the hearth and not about the society, the Polis. However, even a wealthy Idotes can only survive by the society’s mercy. Only, because he can be confident on the society to always be on his side, he can take for granted, not to simply get murdered by his domestics. He would be totally helpless without the public which he contemns by his Idioty.
***

Net-Politics is on everyone’s lips these days. This word, so you may think further, might imply, that there is something like a Polis, a public, in the Internet.

We have been writing several times here that a political public can only unfold if their rules can be negotiated free of purpose. As long as the net is in fact completely controlled by the private economy, a liberal, political discussion, driven by values, is hardly possible. Companies control content over CDNs, backbone, DNS, ISPs, and recently even by means of the operating systems on the terminal devices; at the same time the argument for censorship is hardly ever something political or ethical; like the Wikileaks-App, deleted by Apple, just the Standard Terms and Conditions are brought in.

The situation with Social Networks an platforms is similar. Twitter could block my profile at any time with regard to the STCs, Youtube might delete videos just with regard of alleged infringements. And net neutrality – i.e. treating all data packages in the same way is only as good as the fair chance for all Websites, to get found over search engines.

All the more interesting, I take the observation, how devotional whole legions of Net activists make of themselves lackeys to the telecom industry, to Google, Facebook and especially to Apple – and confound the partial openness of the stacks with the public.

The shifting of information power from content producers, authors, film makers, musicians and their publishers and copyrights collectives towards the content platforms, the social networks and search engines is probably the irreversible consequence of a much deeper cultural change. Therefore the answer on the question how (and if at all) a political public, a society nevertheless will aliment the economic needs of people in creative professions, is crucial for the future shape of culture and creativity. I think, the Pirate Party’s demanding to “regard as natural” and “explicitly support” non-commercial copying and use of works, while at the same time make authors “more independent of existing structures of power” is utopian. Right now, only Telcos benefit from content free to copy by better utilising their bandwidth – and of course the platform operators, too, who generate traffic through this and thus provide better advertising vehicles. And even though I earn my money also with advertising, I would see it as rather poor, if that would be all there is that can sustain culture.

Xenophon used the Idiot already in the fourth century BC in some metaphorical meaning: an idiot is inartistic person, ignorant to poetry.

Read more:
The Illusion of the Free Internet
Everything is Turned into Highway
Censorship?!