“Machines exist to serve us. There is something to be learned for media makers from the culture of the Hacker: not to surrender to the machines, neither reject them, but to take advantage of the machines, to even downright exploit them! Benedikt Köhler 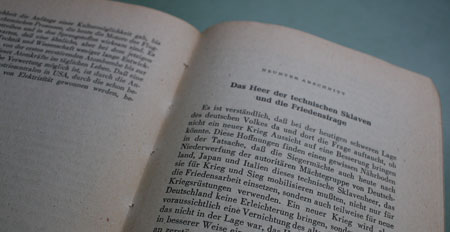 “For that being who by nature is nothing of himself, but totally another’s, and is a man, is a slave.”

For if every instrument, at command, or from a preconception of its master’s will, could accomplish its work (what the poet tells us of the tripods of Vulcan, “that they moved of their own accord into the assembly of the gods “), the shuttle would then weave, and the lyre play of itself; nor would the architect want servants, or the master slaves.”

Why don’t the Gods keep slaves? Because they let, by virtue of their power, their work be done of its own volition, automatically. From these thoughts Aristotle in his Politics derives a dialectic path along which the history of humanity moves – from beast to god in three steps; in our time of automatization this seams fantastically up to date: first man learns to walk upright and thus to use his hands, to speak, to think. He is freed from the elementary necessities. Second, man discovers that the most powerful tool is man himself – or better, fellow humens, that can be made use of: “A man provided with paper, pencil and rubber, and subject to strict discipline, is in effect a universal machine.” (Alan Turing). This is the beginning of slavery.

Yet even Aristotle sees the chance, that humankind can liberate itself again, to resort to ever keeping some proportion of humans in the indignity of being mere means: to someday approach the gods by better and better tools, by Automatoi, technological slaves,

In Modernism, the term ‘Technological Slave’ was introduced by the discoverer of the macro molecules and later Nobel price laureate Hermann Staudinger. Already in 1915 Staudinger warned in an expertise for the German Reich’s war ministery that the outnumbering of technological slaves on the side of the Allies would be superior to the Central Powers’ greater number of human soldiers. Unfortunately, the government did not buy into that; neither ten years later, when Staudinger used this simple argument to belie the Stab-in-the-back legend.

For the last time, Herman Staudinger spoke up in this case in 1946 with a visionary forsight on the consequences of nuclear power and his warning of a “Rise of the Technological Slaves”, so that satisfying the hunger for energy of these slaves would finally lead to total dependance of humankind.

Although we are still far off to have all our labour and work taken away by the automats, the Aristotelian idea of technological Slaves gives a good picture of the role machines should play in our lives.

“Experience has also show you the difference of the results between mechanism which is neat, clean, well arranged, and always in a high state of repair; and that which is allowed to be dirty, in disorder, and without the means of preventing unnecessary friction, and which therefore becomes, and works, much out of repair. […] If, then, due care as to the state of your inanimate machines can produce such beneficial results, what may not expected if you devote equal attention to your vital machines, which are far more wonderfully constructed?” (Robert Owen, A New View of Society)

In contrast to Utopian-socialist Robert Owen’s advocating to give human workers the care that would likewise be given to machines to prevent them from premature abrasion, the social ethics of the 20th century turned this and made man the end and not the means for the existence of machines:

“At the same time, however, there is a growing awareness of the exalted dignity proper to the human person, since he stands above all things, and his rights and duties are universal and inviolable.” (Gaudium et Spes)

Prometheus was nailed to the Caucasus for bringing to humans the ability to rise above nature – and in return the Olympian gods gave us the present of Pandora’s Box – that we would have our own Automatoi. Machines are our technological slaves. They have to serve us. Where they would still oppose we have to learn to subject them in a cunning way.

That is Benedikt’s call, cited above: take advantage of the machines, they are made for this! And that means: also creative professionals, mind workers, editors, journalists, should think like hackers. Hacker for me is a neutral to positive term. Hackers make use of technology as completely as possible. Like famous investigative journalists they don’t let themselves being held up by arbitrary rules which are supposed to tell us how we should use information.

In Google’s algorithms, in the depths of Wikipedia and in the flow of letters on Twitter there is much more to find, as the approved way of using these tools would show. The response of the publicists and journalists on news aggregators like Google News should sound: Hurray! Finally we are liberated from rewriting boring agency reports; finally a machine takes from us, what in fact has never been valuable work. Instead of sabotaging the looms like the weavers, we should see to get the most out of the new technology – to make technology our slave, for Pandora’s Box is opened and the Automatoi that escaped from it cannot be captured again. 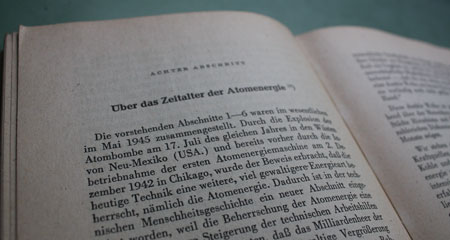 One reply on “The Army of Technological Slaves”