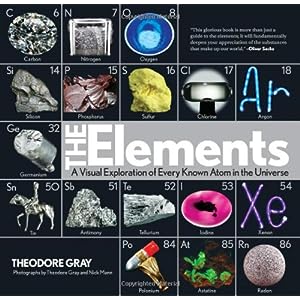 Empedokles postulated in the 5th century B.C. that the world should consist of a finite number of different elements. His philosophy of The Four Elements became the base of occidental science for the next 2000 years. Not until the 17th century, the idea of various compounds of fire, water, air and earth would constitute the world was revised by the Irish researcher Robert Boyle – however just concerning the number and nature of these elements. That there are really elementary components, showing the properties of matter but not dividable themselves without loosing these properties – this is undoubted since the discovery of the Periodic Table and the (re-)discovery of the atom in the 19th century.

And in fact there is an astonishingly scarce number of different elements: hardly 90 can be discriminated on earth. What is fascinating with the elements are their chemical properties that repeat in beautiful periodicity – not without giving way to spectacular outliers, caused by physical effects.

This Periodic Table, developed 1869 by Mendelejew, remains usually mere theory, colourless table with letters and digits of little vividness. Though just the regularity in the manifold of elements allows wonderful visualisation. And this is the very achievement of Theodore Gray, a renowned entrepreneur and software pioneer, co-author of Mathematica and thus element collector.

From his thousands of element samples and findings Gray has put together a wonderful illustrated book that visualises discovery, important properties and the personal relationship of the author with the particular element; large size, hardcover, glossy.

Matching this a website ‘periodictable.com’ where to find what had not found space in the book or what came into the author’s collection afterwards. 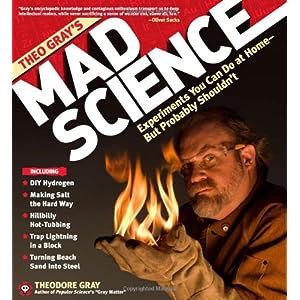 In a second volume “Mad Science: Experiments You Can Do at Home – But Probably Shouldn’t” it goes down to business, equally put visually into limelight and extremly amusing to read. Many experiments I have done myself and it was fun.