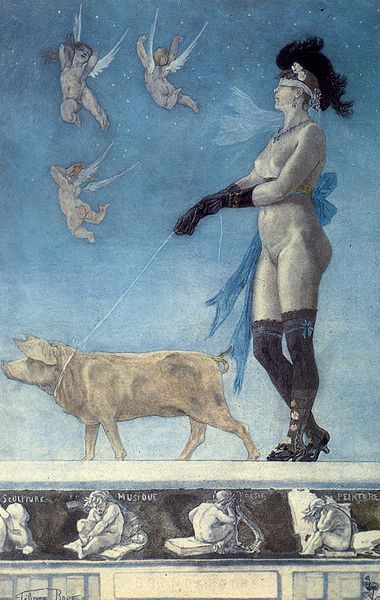 Eternal must that progress be
Which Nature through futurity
Decrees the human soul;
Capacious still, it sthttp://en.slow-media.net/wp-admin/edit.phpill improves
As through the abyss of time it moves,
Or endless ages roll.

Its knowledge grows by every change;
Through science vast we see it range
That none may here acquire;
The pause of death must come between
And Nature gives another scene
More brilliant, to admire.
Philip Freneau

This morning I printed out a song by Schubert from IMSLP.
Before having considered to play the first note, I listened to seven different versions of this song on Youtube – from every decade between 1930 till now. Why? Because I wanted to compile from those my own interpretation of the piece.
Apart from pulling the music score from the web in the very moment it came to my mind to play the song – my way of interpreting does not only fall back on my own teachers or the style of my contemporaries that I can adopt or from which I can distinguish, but now has countless varieties of 100 years of music recording at hand!

***
Art appeared to be driven by progress, because the artists always had some teacher or belonged to a certain school which gave the base of their own creative work from one generation to the next. It is just the distinguishing form the teacher’s style, the longing for improving something, what generated this gradual evolution of art which in retrospection frequently looked like an advancement.

Even if a painter could generally learn about past epochs by means of the local monarch’s art gallery, these works remained mostly anachronistic, relics from a past to be only indirectly connected.
More dramatic was the situation with music – before the invention of the record, interpretations of times past where lost – only what could be heard live was palpable.
My initial example should illustrate how the conditions of formation of style have changed fundamentally by having available nearly the complete creative production of mankind well structured and indexed by search engines – for everyone.

***
Bruce Stirling gave a remarkable speech at this year’s Transmediale: “Atemporality for Creative Artists”.
Stirling pictures by the term atemorality (autonomy in time) the availability of all knowledge and all products independent from their time of production; a phenomenon characterising our time – as said above.
The point when all men in their minds become completely independent from time and space was defined by the French anthropologist and philosopher Pierre Teilhard de Chardin SJ as the Omega Point. Taken from the biblical eschatology “I am the Alpha and the Omega, the First and the Last, the Beginning and the End.” (Rev 22,13) this point at human evolution marks the end of history and the entrance of mankind in a time when the idea of progress has become obsolete.

To think about progress finally coming to an end is likely as ancient as the term progress itself. The concept of progression, that is the Weltgeist slowly and gradually moving to perfection (like in Frenau’s poem above) is fundamental belief of many religions and ideologies. Dissolution in the Nirvana like in Buddhism, entering the classless society like in Dialectic Materialism or Endsieg of the markets like with Fukuyama – in the end there stands a state of motionlessness, the end of flushing and rushing.

***
Without pondering if the return of Messiah or the end of class struggle is pending, Bruce Stirling pragmatically asks how being thus independent from time and space effects the artist.
Despite Fukuyama or Marx making us hope – the world does not become more simple at all: “The situation now is one of growing disorder. A failed state, a potentially failed globe, a collapsed WTO, a collapsed Copenhagen, financial collapses, lifeboat economics.” But he soothes us: “I don’t think that requires a moral panic. I think it ought to be regarded as something like moving into a new town.”
And for not getting blinded by panic of the new, Bruce Stirling recommends to keep a point of view from some distance. If we are looking for today’s avantgarde we should take the perspective of 20 years past. “Strip away the sci-fi chrome, the sense of wonder, no longer allow yourself to be hypnotised by the sense of technical novelty. Accept that it is already passe’, and create it from that point of view.”. – If it works, it’s obsolete.

The exquisite corpse will drink the new wine.

How to make art in a post historic time, when thus progress seams to be nearly impossible? Art after the End of Art? Bruce Stirling sketches two paths that today’s art development may follow – not alternatively but complementary: Favela Chic and Gothic High-Tech. The ruins of a castle, bound for decay sits erected high on top of the muddle of the slum – not a pleasant place but at least still vibrant with life.

Gothic High-Tech is alimented by the glory of the past, by desire for an alternative present.

Punk is the obvious reaction on our epoch with no future perspective: “You have taken my future now I Kill somebody, kill myself, throw bricks to policemen” – a primitive anti-statement that would be as useless nowadays as would be the other poses of the 20th century. But Punk is also about making your clothes and accessories yourself – the Bricolage – the handicraft work as that might be translated, the denial of mass culture and pop by one’s own creativity.

The Frankenstein Mashup is the logical consequence, an eklekticism of finds glued together as in DJ music or post modern architecture. And from the lost utopias of the past wistfully collaged to Lost Futures: Where is My Space Age? – Steampunk, Atompunk, Dieselpunk.

Favela Chic won’t give you the grandiose staging, no ingenious creations of a centennial artist, but lives from swarming which might be found from time to time loosely organized in the Net.
From that two completely new approaches evolve: Generative Art is created by software, if taken strictly by the letter it is only indirectly to be regarded as art, for the visible or audible appearence is technically produced by an algorithm. Collaborative Art makes use of the option to create jointly in the Web, loosely tight together as Wiki-Art or Art-Mob.

These perspectives for making art after the End of Progress are likewise to be transferred on other parts of culture: publishing, film production, cuisine, even laws could be collaboratively negotiated.

Thus decomposed, or recombined,
To slow perfection moves the mind
And may at last attain
A nearer rank with that first cause
Which distant, though it ever draws,
Unequalled must remain.

4 replies on “The End of History – for creative professionals.”

[…] reading: The End of History – for creative professionals. On Lent Slow Media and borrowed time “So literature collapses before our eyes” – […]

[…] second was sketched by Bruce Sterling earlier: atemporality as he calls it; the end of the great narrative, end of progress, or even end of history. The […]